Not A Good Way… 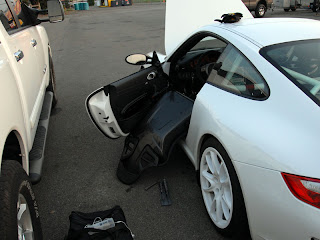 …to start the day.

When I picked up the car from the warehouse on Friday, the seat would not move forward all the way. Thanks to some quick thinking from Ed Newman, he found a small bolt in the track of the seat. After a little poking and prodding... no problem. All was well.

Ed was concerned about that bolt. Where'd that bolt come from? Was it an important bolt? So, before I could say, "Don't worry about it... he pulled the seat, found where the bolt came from and presto-change-o it was fixed.

Now, if only it were as easy to fix my driving!

More pics to follow... but for right now, we're on our way to Phil D'Amato's house. Phil is the former general manager of Habberstad BMW. He retired last year to a town about 40 minutes from The Glen. When he heard we were in town, he invited us over for dinner. (I'm blogging from the back of Ed's mega-turbo-diesel truck!)
Posted by EmilGH at 3:20 PM